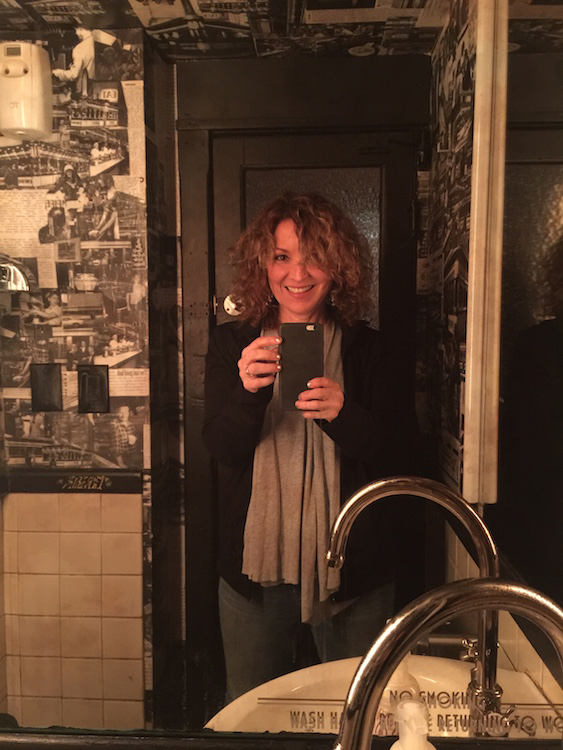 Kimberly Rowe, at the Empire Diner in Chelsea, NYC, NY, while on an art expedition during Frieze Week, May, 2015

Painter, sculptor, and installation artist, Kimberly Rowe lives in Berkeley, and maintains a studio in Oakland, California. Her work has been seen in many solo and group exhibitions in the United States, including all over California, as well as in New York, New York; Tieton, Washington; Chicago, Illinois; Norfolk, Virginia; as well as in London, England, UK.  She has been featured in several online and print articles, including three reviews between 2012 and 2014 by Kenneth Baker, the senior art critic of the San Francisco Chronicle and SF Gate, who retired in May, 2015.  She has been interviewed by Paul Behnke for Structure and Imagery (blog) http://structureandimagery.blogspot.com/2014/03/painters-i-admire-greatly.html, Stephen MacInnis for Painter’s Progress (blog) https://sbmacinnis.wordpress.com/category/have-you-met-and-other-lists/, Mary Burger for Articiple: Artists Talking About Art (blog) http://articiple.com/2014/06/02/kimberly-rowe/, and Nancy Benton for Be Curious (blog) http://www.nancybenton.net/#!kimberly-rowe/cn93, and she has another online interview coming soon. Two of her paintings were used as cover images for print publications: the artist’s self-published, 2013 painting catalogue, An Unwavering Faith in Nonconformity, and the Museum of Pocket Art’s exhibition catalogue Abstract Small (2011). One of her paintings is the cover image for a jazz CD, which will be out in the spring of 2016. Residencies include Vermont Studio Center (A.I.R., 2013); Headlands Center for the Arts (Affiliate Artist, 2010-2012); Painting’s Edge (A.I.R., 2008); and Kala Art Institute (A.I.R., 2000-2005). Kimberly is the recipient of numerous awards and grants, including Juror Awards from Betti-Sue Hertz, former Director of Visual Arts of the Yerba Buena Center for the Arts, San Francisco; Lucinda Barnes, Chief Curator and Director of Programs and Collections, Berkeley Art Museum, Berkeley; and George Rivera, former Executive Director of the Triton Museum of Art, Santa Clara, CA. She earned an MFA with Honors from the San Francisco Art Institute and Bachelor’s degrees Cum Laude in both Studio Art and a special major in Psychology, Philosophy, and Religion, from California State University, Hayward. Kimberly has several scheduled exhibitions over the next year and a half, including a current solo show at Moby Dick in San Francisco, and group shows at Axis Gallery in Sacramento, Durden and Ray, in Los Angeles, CA, and Viridian Artists Gallery in Chelsea, NY. This is her second curatorial project on www.CuratingContemporary.com (please look for See Us Roar, 2014).